The Origin of the 5S Method: Sort, Set in Order, and So On 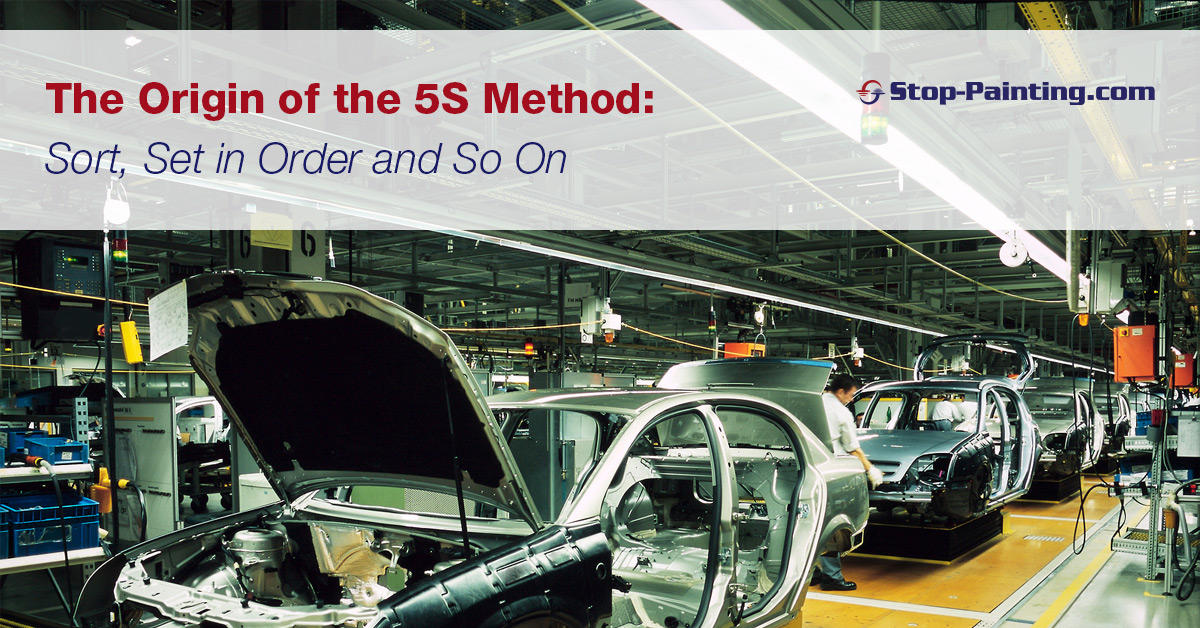 Sometimes to understand what something is, it helps to know where it came from. This article describes the origin of the business technique known as 5S.

It is not surprising that 5S, a method for organizing a workplace floor, originated in Japan. Foreigners who visit Japan are often struck by how tidy and efficient everything is . There is no litter in the streets, people line up for buses in neat queues, and there are visual aids everywhere to provide directions and information. The culture itself seems to reflect a respect for orderliness.

What is 5S? The name comes from five Japanese words that all happen to begin with “s” sounds: Seiri, Seiton, Seiso, Seiketsu, and Shitsuke. The English translations of these words help shed light on the purpose of the 5S method:

Organization, in the present context, means sorting items and storing away those that are not currently needed.

Orderliness refers to putting items where they are easy to use and labeling them so it is clear where to find them and where to return them so others can find them.

Cleanliness is a simple step that means sweeping floors, wiping down equipment, and so forth.

Discipline is making a habit of following proper procedures.

(To make these steps more memorable, they are sometimes described using English words that begin with “s”: Sort, Set in Order, Shine, Standardize, and Sustain.)

How did this five-step method of getting a workplace floor into top shape become so popular in Western countries? The answer has to do with Toyota.

The method that became known as 5S was an integral part of the famous Toyota Production System (TPS), and the histories of the two are intertwined. In the 1950s, the Toyota Motor Company began to develop a radically new system for manufacturing. The company, naturally, did not rush to share its novel approach with others or publish explanations in trade journals or elsewhere. But when Western companies eventually began losing market share to Toyota and other Japanese companies, a spotlight became focused on Toyota’s methods.

What is TPS? Put simply, it is a system designed to make production more efficient by eliminating “waste”—a concept defined broadly to include all things that add unnecessary cost, including waiting time, overproduction, excess inventory, extra motion, and so forth. As part of the streamlining process, the workplace floor is rearranged and kept orderly using 5S. Continual efforts are made at improving organization and processes. There are other aspects of TPS as well: workers have greater input into how things are done; production is based on customers’ actual demand rather than anticipating demand.

The astounding success of the Toyota Motor Company and other Japanese manufacturers in producing high-quality, reasonably priced products was a wakeup call to the rest of the world. Even so, other companies felt sure at first that Toyota’s production methods were culturally bound and were not transferrable to other countries. This attitude began to change when Toyota built automobile plants in the United States that were able to use its production system successfully. The ultimate tipping point in favor of widespread adoption of Toyota’s system arrived with a book called The Machine that Changed the World.

Machine, published in 1990, was written by researchers at the Massachusetts Institute of Technology. A few years earlier, MIT had created a program to study the future of the automobile, and researchers there realized and concluded that Toyota’s unique production system constituted nothing less than a new manufacturing paradigm. The MIT researchers saw Toyota’s system as the next step in the evolution of manufacturing, comparable to what Henry Ford and others had done when they introduced mass production methods to replace handcrafted automobile production. By describing Toyota’s system as “lean production”—a term that the MIT book popularized—the researchers drew a contrast deliberately with the concept of mass production. As the word “lean” implied, the new paradigm was focused squarely on reducing waste and inefficiency to the lowest possible level.

The Toyota Production System drew some inspiration from Western sources, including Henry Ford’s manufacturing ideas and the research of industrial engineers such as Frank Bunker Gilbreth, who is best remembered for his time-and-motion studies. In other words, lean production was a synthesis of ideas from the West and the East.

After the publication of Machine, CEOs and business managers hungered for more books about Toyota’s methods, especially books instructing businesses how to emulate these production ideas. Companies around the world wanted to know exactly what Toyota was doing that gave it a leg up on its competitors.

Books and “how to” manuals came into print on a variety of aspects of Toyota’s production approach. The first English-language book devoted solely to explaining the 5S method was called The 5S’s: Five Keys to a Total Quality Environment, published by Takashi Osada in 1991. Four years later, Hiroyuki Hirano offered another introduction to the 5S method titled 5 Pillars of the Visual Workplace: The Sourcebook for 5S Implementation. These two books summarized the 5S method in a way that was easy for companies outside of Japan to follow.

The books were slightly different in emphasis. Hirano’s book took a practical, nuts-and-bolts approach. Osada’s book was more conceptual and included greater discussion of management philosophy. While both emphasized the importance of having visual workplace cues, Hirano put the term “visual workplace” in his book’s title.

As a business tool, 5S had several things in its favor besides the common-sense proposition that a well-arranged workplace is more efficient. First, the 5S method was easy to understand. It was also relatively inexpensive to put into place. For these and other reasons, 5S soon became one of the most popular techniques of lean production.

The origin of 5S is intertwined with the history of lean production. The term “lean production” was introduced by academic researchers to describe a new manufacturing paradigm created by the Toyota Motor Company. One key part of Toyota’s new approach was to organize the workplace floor so that needed items were convenient to use, quick to find, and easy to put away; the five-step method for accomplishing this became known as 5S. When companies around the world began turning to lean production beginning in the 1990s, 5S became one of the most popular lean production tools, due in part to its simplicity.