The Dangers Of Non-Routine Tasks

What employees don’t know, can kill them!

As I approach nearly 35 years of working as a safety professional, some of the most common phases I hear from employers at investigations involving fatalities and/or catastrophic loss are:

It’s tragic when you hear these types of comments after a serious accident, because you know in your heart that it could have been avoided.  In this article I provide you with a plan to safely implement a non-routine task plan, to protect your employees and maintain OSHA compliance.

As Safety Professionals, we’ve learned that often, employees are killed or seriously injured when they are preforming a job tasks they have either, never done before or only do occasionally.  What I have found so alarming is that when asking a Supervisor or Safety Manager “Did you have a written Non-Routine Task plan for this operation”?  They typically scratch their heads and say, “No, I didn’t know we needed one”.

Here are two typical questions that an OSHA Compliance Officer will ask an employer at the opening of an investigating involving a suspected non-routine task accident:

Do your employees routinely perform this kind of work?

Are there methods used to outline and inform employee/s of the hazards of the task/s they do and were they trained on how to protect themselves from hazards?

Your best answers to these questions should come from your documentation files.  Let’s face it, if it’s not documented, it likely didn’t happen.  Your documentations should be in the form of a written procedure, JSA (Job Safety Analysis) or at-the-least, a copy of the training employee/s received prior to preforming the non-routine work.  This would include a verification of training attendance in the form of an employee’s signature including the date of training.

The OSHA §1900.1200 and 1926.1200 Hazard Communication Standards for General Industry and Construction respectively are clear.  These Standards describe the requirements for non-routine tasks.  The Standards basically require employers to inform employees, in writing of task related hazards and provide specialized training on protective controls and finally, test employee comprehension of the information they’ve learned “before” they perform a non-routine task.

You best meet these requirements by identifying the hazards employees can potentially encounter when engaged in a non-routine task and you must include steps by step procedures, (controls) that employees must take to protect themselves from harm.

Before I begin with telling you how to develop a non-routine task safety procedure, let’s first start with defining a Non-Routine Task.

Non-Routine Task – is an activity or set of activities that are not generally performed on a routine basis.  A task that an employee does not normally perform and for which the employee has not previously been trained.

An example of a non-routine task would be if an employee was asked to clean chemical residue from a floor, conveyor system, tank or secondary chemical container.  It may be as simple as an annual housekeeping project.  It could be a chemical spill or debris cleanup involving hazardous chemicals.  The non-routine task may even involve entering a confined space, with a potential exposure to a hazardous atmosphere.

Pre-Task Survey – Do a walk-through of the job site.  Take notes, pictures, measurements, gather relevant SDSs, workplace chemical labels and conduct inventories of chemicals, safety equipment and other task related supplies. Bring all of this information to the Pre-Task meeting where you will start drafting the operating instructions for the job task/s, considering the optimum safety of the workers.

Assemble a team of diverse stakeholders, such as mangers/supervisors, an HR representative, safety staff, a minute taker and a couple of workers from the field that will actually perform the work and are viewed as experienced leaders or competent persons.

During the pre-task meeting determine all tasks, hazards and safety controls associated with the non-routine task/s and start to develop your written protection plan.

Note the graphic below:  It is important to remember that when determining safety controls, PPE (Personal Protective Equipment) is viewed as the least effective control of hazards. 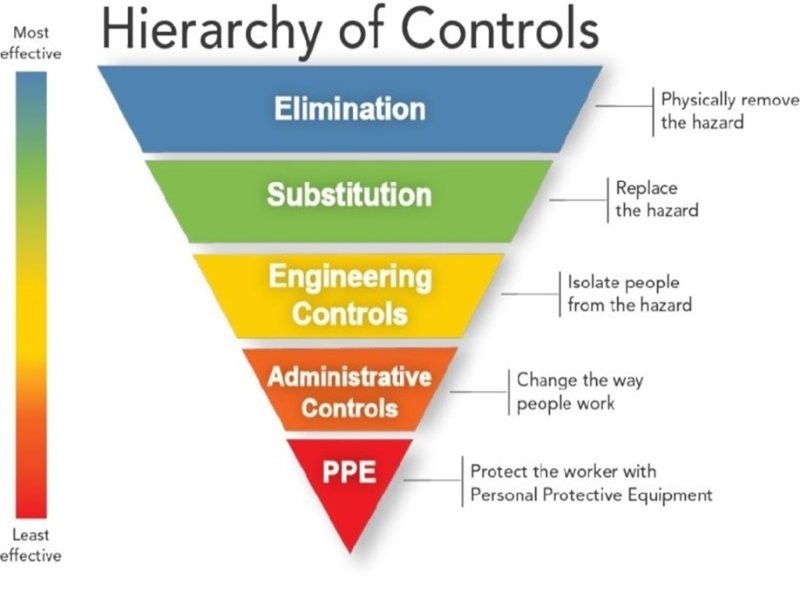 Pre-Task Written Plan – A formal written procedure/plan along with training should be developed and approved by the team.

Pre-Task Training – Employees will be instructed on job procedures, potential hazards and controls identified to protect them.  Controls should be taught and employees tested to assure that the training is understood.  A testing process acceptable to OSHA would best include, both written and practical examination challenges.

Preform the Task/s – Any activities conducted outside of the safe operating procedures will be considered by a competent person to optimize employee safety during the task.

Any employee violation of a safety procedure is considered employee misconduct.  What I always say is that, “Safety is a condition of Employment” OSHA can’t determine “employee misconduct” in an accident investigation, if you can’t prove that you have trained the employee/s and secondly you must have a written disciplinary program.  OSHA prefers disciplinary programs that are progressive, meaning first a documented verbal warning, then a written warning, followed by suspension and/or dismissal.  If an accident occurs you are at OSHA mercy and they are not kind when it comes to employer negligence.

You can bark EMPLOYEE MISCONDUCT all you want in the mediation process with OSHA but the sad truth is, if you don’t have a written non-routine task plan and trained employees, the hammer will fall and citations will be issued.  Even worse than the fines are the indirect costs to your company, associated with the accident, such as: higher insurance premiums across all coverages, deductible costs, loss of equipment/property and in addition, diminished employee moral.

Post-Task Review – Ongoing (documented) frequent and regular inspections of the job task activities and review of the safety protection process helps to improve the procedures and it assures worker safety in the future.

In conclusion, a failure to identify a Non-Routine Task or dismissing the need for written plans and training are the largest contributors to Non-Routine Tasks accidents.

This article originally appeared on LinkedIn.com.  If you have question about this article or his workplace chemical labeling system to meet the GHS deadline in June 2016, you reach Chris at: ChrisaPal@aol.com