Insite Solutions. We are your Floor Tape & Pavement Tape Specialists. 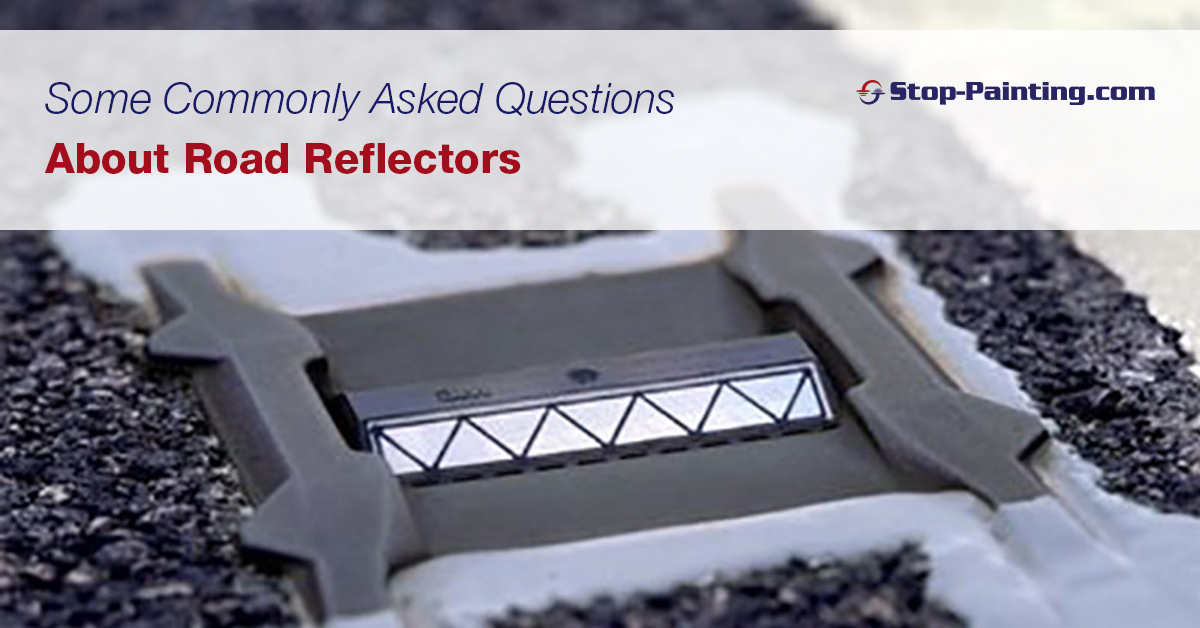 Most of us know road reflectors only as those little objects on the road that glow at us in the rain. Usually we do not give them a moment’s thought—until, perhaps, when the time comes to purchase some. Here are some commonly asked questions.

1. Are road reflectors the same thing as raised pavement markers and cat’s eyes?

Basically, yes. Other terms for these devices include road markers, street reflectors, road studs, traffic delineators, and pavement reflectors. “Cat’s eye” refers to the original inventor’s design, which was thought to resemble a cat’s eyes shining in the dark. Later designs took on different looks.

2. What places are they typically used?

Road reflectors, which guide drivers by reflecting headlights, are used mainly on highways and secondary roads. However, they can also be found around shopping malls, residential subdivisions, municipal buildings, fire stations, and other locations. They also sometimes identify pedestrian crossing zones. One less well-known usage is marking the location of fire hydrants, which assists firefighters in responding to blazes at night.

3. Do the colors signify anything?

4. What are snowplowable road reflectors?

Snowplowable road reflectors will stand up better to the pounding of heavy trucks.

Snowplowable road reflectors are specially designed to be able to deflect hits from snowplow blades. Their shape and metal casing help protect them from snowplows.

Ordinary road reflectors are fairly durable too; they are built to be able to withstand cars and trucks driving over them, which happens constantly. Nonetheless, it is not unusual to see a certain number of smashed road reflectors scattered along a highway after a snowfall, since these reflectors are not designed for snowplow hits. Good snowplow drivers can often avoid hitting them, however.

It depends. There is a cost calculation involved. Some communities have decided that it is more cost-effective to use ordinary road reflectors and be prepared to replace the damaged ones after snowstorms, rather than installing snowplowable road reflectors—which cost more to buy, more to install, and still need to be replaced occasionally. Other factors may influence the choice, too. On roadways with a lot of truck traffic, snowplowable road reflectors may be a better choice since they will stand up better to the pounding of heavy trucks.

6. How often do road reflectors need to be replaced?

As with anything that sits outside on a roadway, road reflectors are subject to wear and tear. They are continually run over by vehicles, as they are designed to be; the bumps they create alert drivers that they are departing from their lane. The replacement frequency depends partly on the road’s average traffic level. Other considerations include how often snowplows clear snow from the road.

In heavily trafficked areas, it is not unusual to replace road reflectors every two or three years. In areas with low traffic, the frequency is lower.

With all road reflectors, it is a good idea to check on condition on a periodic basis, replacing them as needed. The good news about replacement is that the process is fairly simply. On highways, the task is often done using a rolling lane closure.

7. How much do they improve traffic safety? Are there any statistics on this?

There is a lot of evidence that road reflectors provide a very economical way of improving safety. Transportation officials regularly collect data on this, and their studies can be found on the Internet. In particular, the statistics show that road reflectors significantly reduce wet-weather crashes at night.

8. What kind of stress testing is done on road reflectors?

Besides the manufacturers’ own testing, there are independent organizations that conduct tests to evaluate how well road reflectors perform and how durable they are. One is the American Association of State Highway and Transportation Officials (AASHTO). It also tests adhesives used to hold road reflectors in place.

9. Are road reflectors difficult to install?

Not particularly. Most road reflectors are simply glued to the road surface with a strong adhesive. An easy way to do this is with butyl pads; another method relies on epoxies. The installation of snowplowable road reflectors is more time-consuming. Sometimes a groove is carved into the pavement and the reflector is placed into the groove.

What is the difference between the butyl pads and epoxy?

Both products are recommended equally depending on personal preference. They are equally durable. Most people find the butyl pads are easier to work with because they don’t have to worry about the epoxy setting. We have posted videos of all three installation methods on our website, which may be helpful as you decide which one to use.”