OSHA Fine Increases Are Being Felt! 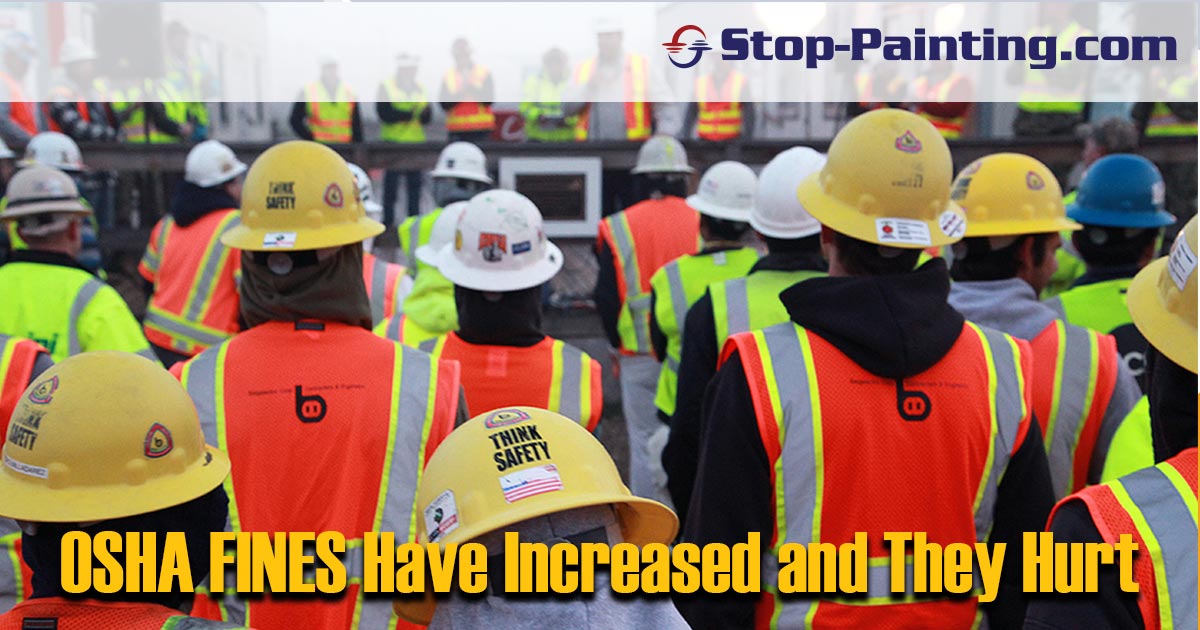 Businesses across the U.S. are feeling the pain of OSHA’s newly increased violation fines. Since August 1st, OSHA fines have cost violators about 78 percent more than in the past. The increase is thanks to a Congressional Act passed in 2015, meant to adjust fine amounts for the first time since 1990.

OSHA warned the public that this was going to happen. In July of this year, there was a new schedule of fees released by OSHA to show what the old fines were, the new fines and the difference in dollars. Basically, fees will be increased by an average of about 78 percent. In hard numbers, that means the top penalty for serious violations will rise from $7,000 to $12,471. The maximum penalty for willful or repeated violations that ranged from $5,000 to $7,000 will now increase to anywhere between $8,908 to $124,709. The increases will become effective for violations discovered on or after August 1st.

Why is this happening?

Politicians, of course! But really, it had been a long time coming. The increases are a result of last year’s Congressional Bipartisan Budget Act of 2015, which requires federal agencies like OSHA to adjust their penalties based on inflation on a regular basis. Congress directed that the adjusted amounts apply to all penalties proposed or assessed after August 1, 2016. The act was intended to improve the effectiveness of civil monetary penalties and to maintain their deterrent effect. OSHA had not changed its penalty schedule to account for inflation rates since 1990. To underscore how much inflation has gone up since 1990, a postage stamp was $.25 (now a stamp is $.47) and movie ticket was about $4 (now a ticket will cost about $10).

It’s a fact that some companies simply see OSHA fines as a cost of doing business. They know they are violating a regulation, but they continue to do so because paying a fine is cheaper than investing in change in their workflow to increase safety. One can look at the incident reports on OSHA’s website and see the same businesses are cited for the same violations, over and over. This puts workers at risk, over and over.

Sharon Block, the Principal Deputy Assistant Secretary of Policy at the Department of Labor, explained that outdated penalties are a problem because civil penalties are less effective when they do not keep pace with the cost of living. “Penalties deter violations of the important laws that we enforce, which not only result in safer, more productive workplaces, but also in a more level playing field for responsible employers who have to compete with the minority who try to save money by evading the law,” she said. Block said it’s critical that penalties which have lost ground to inflation, be modernized.

What does this mean for you?

If you’re currently violating safety rules because it was cheaper to pay the OSHA fines, you may want to crunch the numbers again. And, really, once you factor in the cost of lost wages, insurance and possible lawsuits from workers who suffer from employer safety negligence, it’s just not cheaper to continue to resist instilling some safety upgrades.

If you’re like the majority of employers, you do have safety rules and regulations and regularly encourage employees to work safe. Maybe this would be a great time to walk through your work space and see if there are any improvements or additions you could make to your workplace to make it even safer. A successful business is a business able to appreciate there is always room for improvement.

Our products are designed and created to improve facility maintenance and safety in all types of workplaces. Visual cues and training are the best ways to improve safety in a work area and we are here to help you make visual cues a top safety priority in your business.